Submit an Online Request or Concern

During a snow event, clearing main roads is a priority.  After main roads have been cleared, secondary roads and subdivisions are addressed.  Alleys are cleared during the course of these sweeps, as crews are able.

One sweep of the city may take three to six hours, depending on the snowfall event, when the snowfall hits, and how heavy the snowfall is.  Most of the main roads can be cleared in approximately 3 hours during most events.

What is the difference between anti-icing and deicing?

When and where will Warsaw use anti-icing?

Warsaw may use anti-icing when snow or an ice event is predicted.  Anticipated temperature and type of precipitation at the start of a storm will determine its use.  Warsaw's anti-icing program covers 220 lane miles of roads.  Depending on the storm event and timing, only main roads and bridges may be treated.

What chemicals are used?

Dry sodium chloride (salt) is Warsaw's primary snow removal and ice control chemical.  It is applied directly to the pavement once the storm starts.  Dry salt is most effective after the snow has accumulated about an inch and the temperature is 16 degrees Fahrenheit or warmer.  Liquid sodium chloride (brine) is an anti-icing and pre-treatment chemical.

What should I do if I drive up on a Warsaw anti-icing truck?

If you see an anti-icing crew spraying chemicals on the road, slow down.  Do not follow the trucks too closely.  If you must pass an anti-icing truck, do so carefully.

Need help clearing this build-up from the end of your driveway due to a medical restriction?  Complete our Snow Removal Assistance Form (PDF). 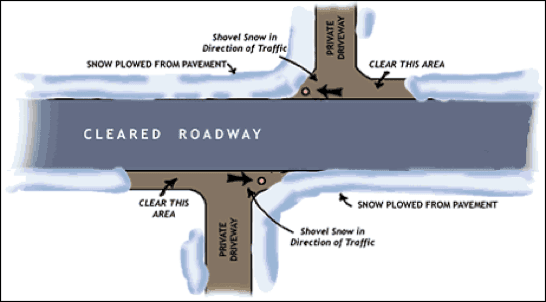